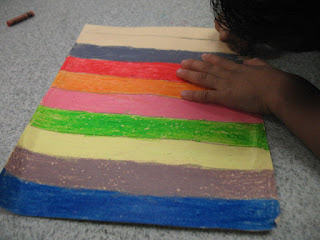 Kindergarten and First grade have always been the two areas that I feel I struggle with the most. This year I am trying a different approach. I have decided to focus more on motor skills and manipulation of media with them. The curriculum that we follow in our district requires that we teach "lines" to these two grade levels for the first six weeks of the year. I decided this year to look at three kinds of lines with them; straight, curved, and zigzag. We will have one production assignment for each kind of line. Starting with straight lines we are looking at the artwork of Gene Davis.

Way back when I went to college the first time, I was introduced to the artwork of Gene Davis in my color theory class. Looking at reproductions in books, I remember not being totally knocked over with enthusiasm. That all changed during a visit I made to the High Museum of Art in Atlanta Georgia during an exhibit which featured works of his, Morris Louis, Frank Stella, and other color field artist. Standing in front of these massive walls of colors changed my entire perspective on the artworks of such artists.


To try to give my students such an experience I showed them works by Gene Davis, blown up as large as I can with my projector, letting them know that many of these works are even larger in person. The room filled with excitement when I showed them Davis's Franklin Footpath from 1972. This was a great time to have the "what is art?" talk with kindergarten and first graders. 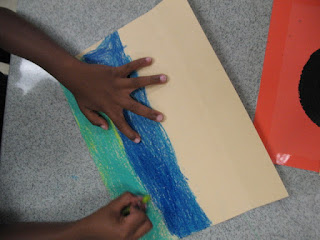 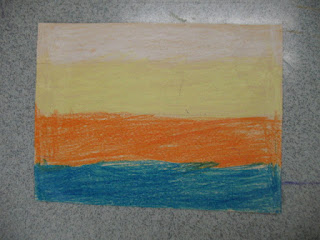 For my kindergarteners, the main focus was some introductory art skills, mostly folding paper and coloring in an area with crayons until the space is filled and the color is dark.

Students were given 9x12" manilla drawing paper. First they worked on writing their name. Then we focused on folding our paper lengthwise, then lengthwise again. This gave us four basic stripes. Kindergarteners were shown to trace the creases with a light colored crayon. When we started coloring, we started with our favorite color, and worked on slowing down and coloring one stripe at a time. This is some challenging stuff for the second week of school ever (the case for many of my kindergarten students).

We slowed this down enough to cover two times of meeting in my class. Before finishing on the second day, we read A Bad Case Of The Stripes, discussing what an illustrator is, and the illustrations of David Shannon. 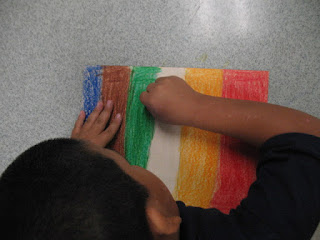 First graders also learned a new skill, one I have noticed even middle schoolers struggle with, drawing a straight line with a ruler. In the past I have waited till second grade to use rulers with my students for drawing straight lines. However, last year I took a chance with kindergarten and first grade, teaching them how to draw forms (3D Shapes). They blew my mind and were even able to draw 3D houses and even cars. This year when they came back to school you could tell that they had been drawing 3D all summer. 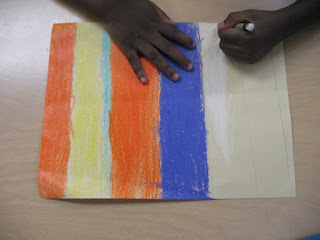 Excited to see their progress, I knew they could handle straight lines with rulers. Sure enough, we practiced a few times on the back of their paper and they got it. The trick I told them was making a big L with the hand they do not draw with, then putting it in the middle of the ruler and pushing down super hard, like the Hulk, then keeping their pencil against the ruler and dragging it from the top to their chest. I told them that I had to see their muscle on their ruler hand. This worked great. 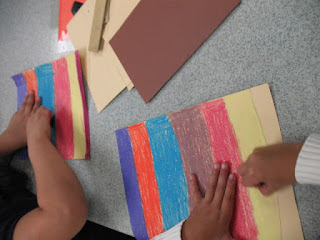 Like the kindergarteners, my first graders also had to work on coloring darkly with crayon and filling the space so that we could not see the paper. I tried to encourage them to make some fat stripes and some skinny, but most still played it safe and made stripes that were fairly uniform. This was a simple project, but full of skills that will help with everything we do in the future. 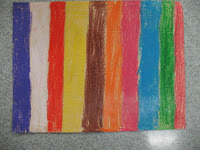 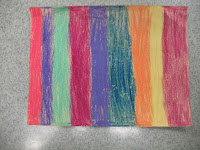 Posted by jackaaronfleming at 7:23 PM No comments: 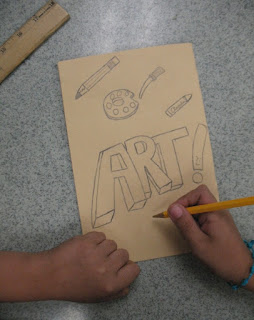 The second week of school is now over. Time to create my first classroom post. With all of the craziness of the first few weeks of school I am trying to take it a little easy on the students and give them assignments that are challenging but not full of pressure. 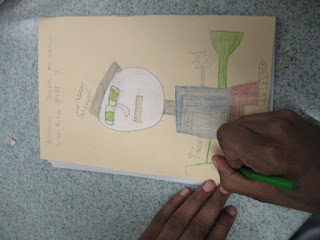 Last year I started having my students make an art journal. This is where we keep all of our "bell work." When the students come into the room and find there seat, we start off class with a 5 to 10 minute assignment to introduce what we are doing for the day. This is usually where they learn vocabulary, and have an opportunity to describe, analyze, interpret, or judge. So, for the first day in class this year we created our first journals by folding in half a 9x12 sheet of manila drawing paper for our cover, and 5 sheets of 9x12 newsprint for the inside pages. Students learned the procedure for their art heading by putting it on the front of their journal, and then were given the task of being a cover artist and designing the cover of their journal. These journals will last us the first half of the school year. Last year I had 3rd grade through 5th grade work in their art journals, this year I am including 1st and 2nd grades as well. 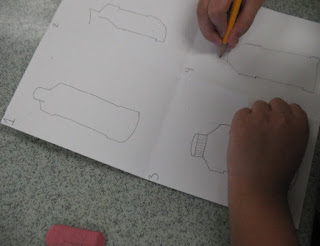 I am starting my third year as an art teacher now, and one thing that I decided for this year is that my students need more exercise in observing, and creating observational drawings, or paintings, or whatever else we can record observations with. The curriculum in my district calls for starting the year out teaching about lines. So, we had a small assignment this week creating contour drawings. This assignment was given to both 2nd and 5th graders, mostly because I wanted to see what differences there would be between the two age groups, but also because this kind of work scaffolds well into the assignments I have planned for those two grade levels this year. 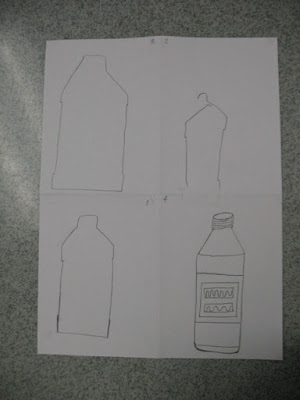 I sold the students on this assignment by talking about exercising to build strong muscles, and how artist have exercises to build strong art skills. I let them know that we were going to do some artist exercises. After folding our papers into fourths and labeling the boxes, we had four exercises. First was drawing a paint bottle I set on their table using only one line and not picking up our pencils till we were done. Next was doing the same thing without looking at our paper, but focusing on the bottle. For the third exercise, we had to draw only the outline, but could pick up our pencil if needed. Lastly, I gave them the rest of class to do their best line drawing of the bottle, looking for details, and making corrections as needed.

Throughout the process I made sure to give them tips about looking carefully at what kinds of lines made the shape of the bottle, even some talk toward the end about thick and thin lines. My students seemed way more engaged in this than many lessons we have had in the past, and created some very honest drawings. It was a great learning experience for the students and for me. 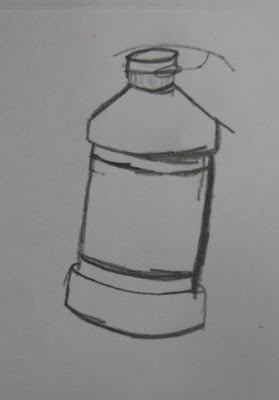 Here is one of my favorite drawings that came from this exercise. Tons of character.

Posted by jackaaronfleming at 8:48 PM 2 comments: